I first heard of Kvass during my Junior year in college whereupon I was researching different possibilities  of making beer. This went along with my interests of other fermentates such as Kefir, Kombucha, Saurkraut etc... 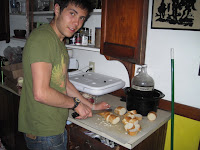 Conveniently, my brother at the time worked at a Hyvee Bakery in Iowa City. Almost daily they threw away their stale bread, without even giving it to any soup kitchen or anything. My senior year, I asked Luke if he could save me a couple boxes worth of the bread. Weeks later, he had accumulated three larges containers worth of predominantly stale white and wheat loaves. I knew that traditionally Kvass was formulated on rye and other dark breads, but I had to use what was available.
My first attempt was a bit of a crap shoot. I sliced all the bread into smaller pieces, threw a couple pounds of malted wheat along with clove, cinnamon sticks and bay leaves, all into the mash. I don't particularly remember the rest of my procedures, but do recall that it was fermented with a wild (house cultured) yeast and blended with Lemon and Kombucha. This sat for nearly six months to fully reach its potential. The finished product tasted extremely similar to a pilsner and was just as bright!
I brought a bottle to my interview at New Holland. 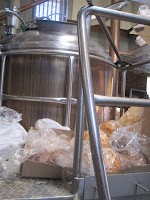 Fast forward a couple years later from my first kvass brewday and I got the opportunity to brew a version on a commercial 10 bbl system at New Holland's brewpub. I had been collecting bread from various festivals for nearly 4 months prior. Similarly, De'Boer's bakery would drop off the occasional box of hardly stale, sliced bread; and I would frequent Crust 54 on most weekends to pick up what was left of the stale bread. By February I had accumulated nearly 300 loaves, all that was left was tank space and a brew day to fit into the schedule.
Brew Day
April 2 rolled around and I had my opening. The night before I took all the bread out of the pub freezer and let it defrost in the brewhouse area. I had planned my recipe around some traditional aspects, but with the intention of balance and complexity. 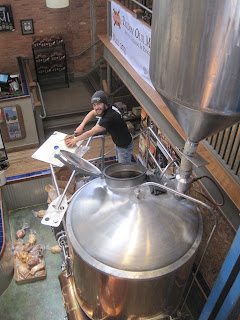 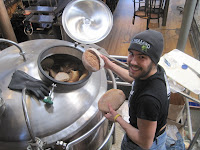 The decision behind this recipe was to use the malt to be more of a fermentable sugar and biscuit backbone to fuel the bready flavor profile. Using just the bread would not get my intended gravity of 2-3.5% ABV (though the traditional Kvass stands only between .5% and 1.5% ABV). Similarly, Kvass utilized whatever ingredients could offer a source of sugar, therefore to comply with that tradition, I used whatever stale grains that were left in partial bags around the brewery. The cinnamon sticks and coriander further encouraged some bready, spiced complexity. 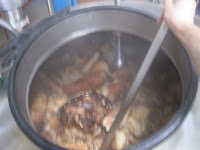 I preheated the mash and began mixing in the grain. Once all the grain was added, I continued to maintain temperature around 160 to ensure enough body and residual sugar in the finished product. My next step was to add the bread. This took quite sometime, as half the loaves were whole and unsliced. I did my best to slice all the bread. The mashing process took a little over an hour. One recommendation here is to use as much water as possible so as you work on adding the bread, the grain bed settles and the makes its own floating mash and doesn't make a sticky aggregate of soup, thus potentially clogging the mash when it comes to sparging.

The run-off went well and the boil lasted 90 min, during which 1 Ib of cascade was added and 2.5 gallons of molassas. I used our normal house yeast for fermentation of which will take an undecided extent of time. Gravity came out to be around 9.5 Plato, and it's finishing around 4.5-5.0 Plato. This ultimately will get us an alcohol of 2.5% ABV...Perfectly sessionable. The wort smelled of ginger snap cookies and toasted rye bread. 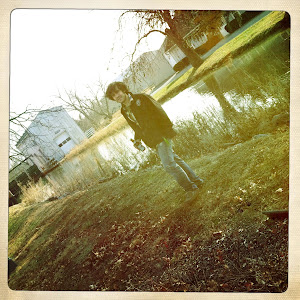