For the last several months I've been researching Foudre's ( The French method of spelling - while the Dutch way is "foeder"). The opportunity arose when I took over the barrel aging program for New Holland. The sour program had already trippled its barrel count, but that came with the hard realization that the work of tasting and blending each barrel is, in fact, an arduous task. With the post-blending reflection of Blue Sunday, I knew there had to be a better, more efficient way of blending bulk sour beer. The answer was Foudre's. 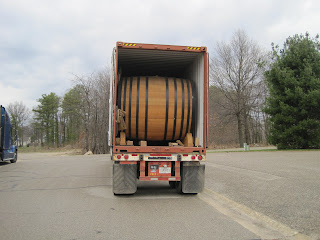 I asked Brett if I could begin researching and constructing a proposal. His reply - "Yeah, let's get some!" So I began searching. By talking to brewmaster Tim Hawn of Dogfish Head, Lauren Salazar of New Belgium, they were able to point me in a direction. Still, contacting numerous cooperages, barrel brokers, brewers, and tonnellerie was the bulk of the work. Months of digging and numerous dead ends later, I started to find some options. But, they were either far to expensive, too small, old, lacking structural insurance, or just crap. Finally I found Seguin Moreau, a barrel broker/cooperage that seemed to have the perfect option - 9 x 45hl horizontal French oak Foudre's that had just been emptied of white wine. Upon receiving this notification, a proposal was sent to everyone that could have influence on the financial decision of their purchase. This took more time than expected.  I had let the team know the urgency of this deal, particularly because within a week 3 had already been called for. This got things moving.

My arguments for getting our Foudre's:
- Increased sour volume, decreased needed barrel space 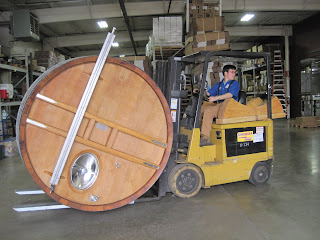 A successful proposal, a fast reaction and several meetings later, our Foudre's we stuffed into a 40' flatbed and on their way from France to Holland, Michigan!

So what's a foudre? 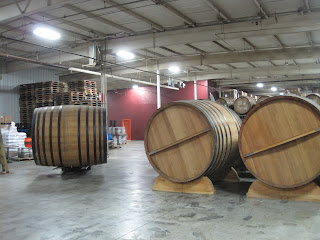 Foudre's are large oak vats, that can range from a couple hundred gallons, up to several thousand (think of Dogfish Head's Palo Santo Vats). Prior to the universal adoption of stainless steel, ALL beer was fermented and matured on wood. By the early 20th century, using oak was nearly phased out except for traditional brewing cultures around Europe. Today, they are primarily utilized in the wine industry to impart the tannic qualities of the wood. However, sometimes these vats become spent - wherein the time it takes to extract those lignan characteristics from the wood becomes longer and longer to reach that acceptable level for that particular wine. Similarly, occasionally a batch of wine will become infected with a known variant of Brettanomyces. Once in there, it is near impossible to get rid of thus rendering the vessel a festering tub of uselessness and a point of further contamination for the rest of the winery.
Brewers love when that happens....

I should note that distilleries rarely use anything larger than the common 53 gallon barrel due to the SA to volume ratio of wood to spirit. Extraction is minimal, and time is exhaustingly long to get the same desired oak/vanillin elements.

So these barrels are put on the market by brokers and cooperages and the brewers these days are snatching them up like no other! 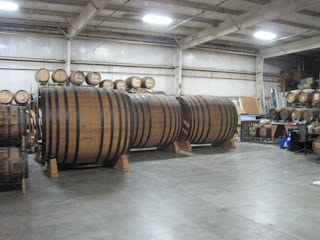 Our Foudre's that arrived April 23rd, are 45 hl (38 barrels or 1188 gallons) Horizontal oak tanks roughly 6 feet wide and 7+ feet long. They came with large oak floor craddles, and all the stainless accessories - Drain valve, beer valve, sample port, sight glass, and manway door - as well as a large rubber bung at the top.
The plan currently is to use two of them for Blue Sunday. The rest will be used for a few new brands we are testing the waters with, that have yet to be publicly announced.